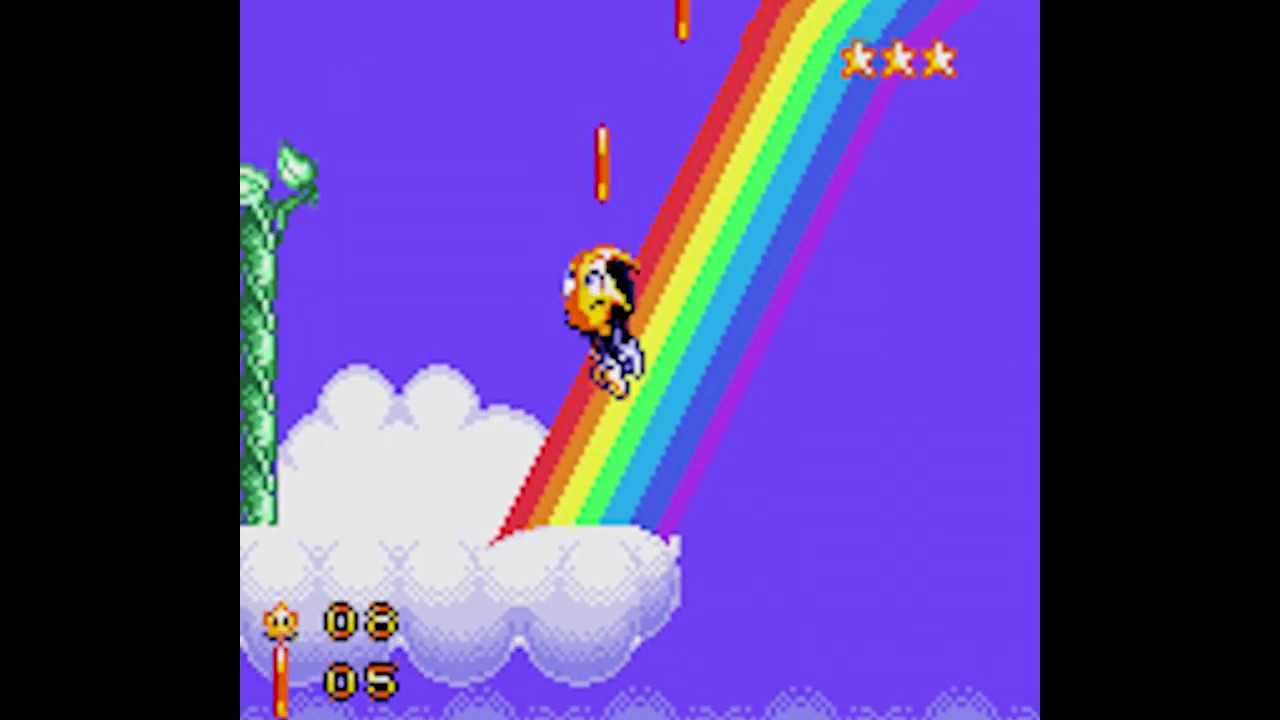 This video shows off the absolute biggest reason why I’m playing through the Japanese version of the Game Gear version of Ristar.

Outside of Japan, Planet Terra, or Fanturn as Japan calls it, would take place along a sea full of pirate ships. This is actually the second act of the entire planet, which is why it usually takes one Act to reach the boss.

In actuality, the first Act of Fanturn/Terra takes place in a sea of clouds, rainbows, and beanstalks, instead. The rainbows are steep slopes, but they can be re-scaled if you slid down them.

For some bizarre reason, this cloudy part of the planet doesn’t exist outside of this game’s Japanese release, though the pirate part can still be played through like normal. As such, if you are playing the American Game Gear version, you just have to find one blue planetoid instead of two in order to access this level’s Bonus Stage.

Another thing to note about this planet’s true Act 1 is that it uses an 8-Bit rendition of Planet Elykiki/Freon’s first music. This is despite the fact that Freon, itself, is still in the Game Gear version (but perhaps reaching it will reveal why this music choice was made).
———-

This unique planet also has a unique boss named Insomniac. He seems to have trouble sleeping, hence his name. It has to do something with that bat nearby!

The snot bubbles he makes are only because of that bat. Try to use them to reach and hit that bat more easily, or just try jumping for it on your own.

It seems like every time Insomniac falls asleep, the scenery changes. It appears that this world is a dream world created by him!

Don’t let him inhale you with his trunk, or let him hit you with his pillows. Instead, grab the pillows he throws at you, and throw them right back at him! Do this enough times to destroy him, along with all of the peace of the planet as it all turns into a violent and stormy world!
———-

This planet as a whole not only has a bizarre situation over how much of it you can play of it between regions. It’s also the only planet that’s entirely unique to the Game Gear version at all! As the second stage, it completely replaces the Genesis version’s second planet, which was the water planet Leatow/Undertow.

Leatow/Undertow in the Genesis Version:

After complete Fanturn/Terra, here, you go straight to Planet Neuos/Sonata, which means that Planet Onaclove/Scorch is also missing from the Game Gear version (but not entirely as I’ll show MUCH later on in this playthrough.

Planet Onaclove/Scorch in the Genesis Version: