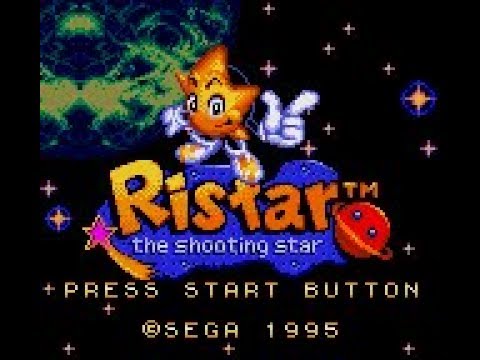 Every big Sega fan knows about Ristar, right? That cute moving star that’s based on one of Sonic’s prototype concepts? Amazing game for the Sega Genesis, but it’s still a shame that it never got the sequel it was claiming to get.

I have made a playthrough of the Genesis version of this game already. However, did you know that it also has a Game Gear version? While Sonic Team made the 16-bit version, this 8-buy version was instead made by New Japan Systems, a.k.a. Biox.

I’d say a majority of the Genesis version was carried over into the Game Gear version, stagewise, at least. However, some levels were completely removed, one level is completely different, and this version also has a completely unique level of its own.

I’m gonna cover all of that and more in this playthrough, including an interesting quirk that only exists in its Japanese release.
———-

Like in the Japanese Genesis version, the opening shows the evil Greedy taking over all of the planets in the Valdi System. Each of the planets leaders would gather to hope and pray for a hero that can help them from against this tyrant.

The Star Goddess, Ourto, was then sent to find this hero, who turns out to be the young Ristar the Shooting Star!
———-

Since this playthrough is of the Japanese version, the planets will use their Japanese names, such as Neer instead of Flora in this video case.

This first planet’s layout is almost completely like how it appeared in the Genesis, with some changes here and there, such has having to break through green blocks, and new paths to get some goodies.
———-

There are some things completely exclusive to the Game Gear version:

– There tiny red stars you can find. Pick them up to turn invincible and move faster for a few seconds. Ristar even jumps more like Sonic during this!

– Bonus Stages are both accessed and playthrough differently. You have to find a blue planetoid in each act of a planet. You then go through the Bonus Stage after the planet’s boss is beaten. In the Bonus Stages themselves, you have to collect 200 stars without falling off the stage. This insures that you always get 2 1-UPs.

Flora’s boss is still the same, too. You must battle Riho, who possessed the planet’s leader to attack you. Just hit the flying druid to knock Riho off, then attack Riho, himself. Do this enough times, and he’s done!

You move on the next planet afterwards, or after you’re finished with the Bonus Stage if need be.

Now onward to the next planet, and the biggest reason why I’m playing the Japanese version of this conversion!
———-

Planet Neer/Flora in the Genesis Version: