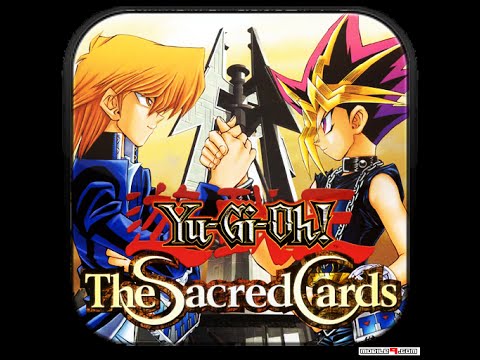 Yu-Gi-Oh! The Sacred Cards (Video Game)
For Nintendo Game Boy Advance
“The game starts when the player and his two friends, Yugi Moto and Joey Wheeler are preparing for the Battle City tournament of the card game known as Duel Monsters. In order to win the tournament, the player must obtain six Locator Cards which are received after beating certain characters in Duel Monsters. After all of the locators are obtained, the player is entered into the finals.

However, a mysterious person named Marik has a gang of card thieves known as the Ghouls which he is using to obtain the three Egyptian God cards to bring the world to darkness. Marik’s rare hunters eventually take over the whole city. Even the owner of the card shop works for Marik and tries to kill the player. Then, the player meets up with a character named Ishizu Ishtar. She challenges the player into a game of Duel Monsters to see if he is strong enough to wield an Egyptian God Card. After she is beaten, the player must beat Seto Kaiba, the person that organized the tournament, in order to obtain the first God card.

After the player gets into the finals which take place on a blimp, he duels Marik. After Marik is beaten, it is found out that it was not really Marik. It was actually one of Marik’s servants. The real Marik was the person the player met earlier in the game that became one of Yugi’s friends: Namu. Then, Marik starts stealing the souls of those he beats. After Marik defeats Kaiba, the player must challenge Yugi. After Yugi is beaten, the player must face Marik.”